Activision has just told MCV that Quantum of Solace hasn’t slipped for the UK market and will be released October 31st as originally planned.

The publisher told us that the comments regarding an apparent delay in release for the upcoming Bond title were intended for the German market only, and that there had been no changes for the release date here in the UK. 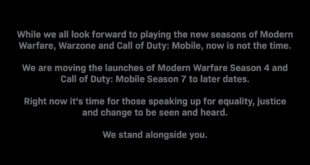 Gaming presses pause in respect of US protests – Activision joins EA and PlayStation – but what about the other ‘E3’ shows?