Hello Games: We built this studio to make No Man’s Sky

No Man’s Sky developer Sean Murray says he formed Hello Games six years ago with a view to develop the hotly anticipated No Man’s Sky.

He revealed at Gamescom that while he loves the studio’s previous game, Joe Danger, that title wasn’t what the company set out to do.

"Hopefully you can get a sense with No Man’s Sky, and what we’re trying to do is a culmination of ambition for us," said Murray.

"We pretty much made Joe Danger to give us the ability to make No Man’s Sky."

The title, coming to PS4, is pitched as a procedurally generated sci-fi game that allows players to explore worlds and the universe at their own pace. Players will get to discover their own planets, wildlife and fauna as they venture across the stars, as well as engage in space battles.

The idea has been in the making since the studio started out six years ago, under the codename Project Skyscraper. Murray said one of his goals was to make triple-A developers and publishers, such as his previous employers EA and Criterion, jealous of what the small UK studio could achieve, given the freedom to do so.

And to achieve this end, the universe Hello Games has created is vast. In fact, Murray calculates that if a player was to visit a planet every second, it would take them some five billion years to find them all.

The developer is also keen to bring a fresh take on science fiction to games, a genre which he believes has never truly been done in the industry, likening the title to the old sense of discovery in books from the 60s, rather than the dystopian, space marine-filled sci-fi narratives of the last 20 years. He admits this take could make some planets "boring", but hopes the notion of exploration will be enough to entertain and surprise.

"We’re not trying to make Halo or Call of Duty," said Murray. "You can be bored in this game. It’s not going to be scripted. There will be space battles and dinosaurs, there’s a lot of fun to be had. But I had to do what I should do as a sci-fi explorer, I had to go out and find that, and that’s really interesting." 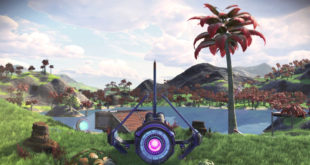 Sean Murray will open Develop:Brighton 2019 with a ‘candid’ keynote focused on No Man’s Sky