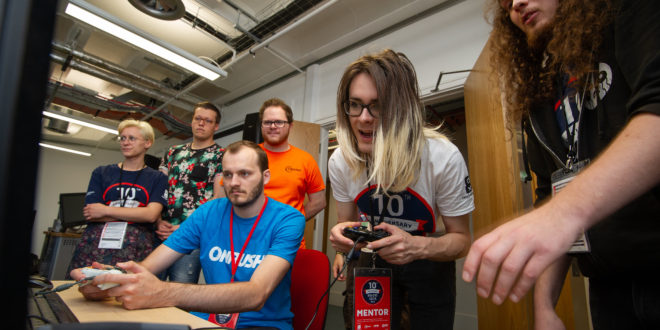 Here are the winners from the biggest ever Brains Eden

Brains Eden 2018 just closed its most successful edition to date, which also happened to be its 10th anniversary. 175 students from 35 teams representing eight countries took part in the game jam this year, which once again gave the participants 48 hours to create their game.

The theme this year was ‘Unreliable’ with seven awards up for grabs on the last day of the event.

The Best PC Game Award was won by the team from French animation and games school Pôle 3D with multiplayer title Walkers, Texas Developers, which was described as “consistent with amazing artwork” and “so polished” by the judging panel (comprised of senior representatives from Frontier Developments, Jagex, Codemasters, HyperX, Sumo Digital, and more).

The Best Mobile Game was won by the Spanish team from the University of Alicante for Wasted Horchata, of which the judges said “showed amazing depth, great narrative and clear progression.”

The team from the NHTV Breda University of Applied Sciences in Netherlands won the Judges Choice Award with a game called Team Cabal, described as “just beautiful” and “simplistic” but with a “great concept.”

Meanwhile, Bitz Box from the University of East London was awarded the Tech Team Choice.

Three new awards were introduced this year. Frontier Development was debuting its Game Innovation Award, which was won by the Huazhong University of Science and Technology from China for the title Memory. Jonny Watts, CCO at Frontier, said: “It was so difficult to judge because there was innovation in every game but the winning team’s game impressed me so much that I want a copy for myself!”

The new Best Storytelling without Words Award, sponsored by Cambridge Assessment English (CAE), was won by Roses For Her developed by Digital Arcade Enthusiasts from Howest, Belgium. The game was described as “charming” as it revolves around an elderly man using his final hours to give flowers to ladies. Marianne Pickles, senior assessment manager at CAE, commented: “We’re really excited to be part of this event; we’re interested in how games, learning and testing can be brought together. The games were all great – we played them all.” The team also won the HyperX Best in Class Award.

Dr. Apurba Kundu, Acting Dean of Faculty of Arts, Law and Social Sciences at Anglia Ruskin University (where the game jam was hosted) commented: “Anglia Ruskin University is delighted to have hosted Brains Eden annually for the last 10 years. Brains Eden is the World Cup of games development and it is fantastic to have had representatives from China, Holland, Belgium, Spain, France and the UK participating. The games sector is really important in the economy; it is enormous and booming and Brains Eden gives students access to that. We hope to be hosting Brains Eden for another 10 years and that we can make next year’s even bigger and better.”

Marie Dealessandri is MCV’s former senior staff writer. After testing the waters of the film industry in France and being a radio host and reporter in Canada, she settled for the games industry in London in 2015. She can be found (very) occasionally tweeting @mariedeal, usually on a loop about Baldur’s Gate, Hollow Knight and the Dead Cells soundtrack.
@mariedeal
Previous Japan H1 data: Switch sells 1.12m units, Nintendo dominates Top 10, Monster Hunter nears 2m units
Next Gfinity’s Martin Wyatt: ‘London is open for (esports) business’