Developers must be careful of how they manage their free-to-play games and in-app purchases in the face of the Office of Fair Trading’s investigation into the business model, says Peter Molyneux.

Speaking to Develop Editor Will Freeman at the F2P Summit, as transcribed by The Guardian, Molyneux warned of the dangers that a varying set of regulations governing in-app purchases could have a major effect on the entire UK industry.

The OFT recently announced it would be scrutinising the way in-app purchases are used in children’s games, and whether developers had been using unfair practices to encourage kids to spend money after reports that youngsters had spent thousands of pounds of their parents’ money on IAPs.

"If I was a betting man I’d think the platform providers will start trying to answer that question fairly soon," he said.

"You can’t have people racking up bills of hundreds or thousands of pounds without them knowing what they’re doing,"

Molyneux cautioned that any regulations that could stem form the OFT’s regulations could impact on developers’ willingness to release games in the UK.

The industry veteran also said that developers should make efforts to ensure free-to-play games avoid becoming similar to gambling, or parents could be scared off from free games with IAPs almost entirely.

"We’ve got to be careful that the OFT doesn’t create a regime where us developers don’t want to develop for the UK, so you have to be very careful," he said.

"We also have to be careful that we don’t fall into the trap of making our games the equivalent of gambling, where parents will say ‘my kid must never play one of these games’." 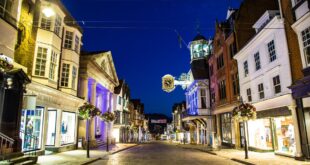 Regional Spotlight: How Guildford became the ‘Hollywood of Video games’