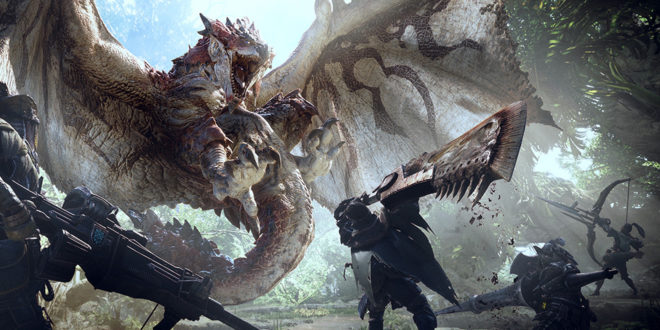 Monster Hunter: World debuts at the top of the UK charts

Capcom is back at the top of the UK charts for the first time since the release of Resident Evil VII: Biohazard exactly one year ago.

Monster Hunter: World entered the UK weekly charts directly at No.1, with sales far superior to any game in the franchise so far. The highest ranking for a Monster Hunter title so far was 3DS exclusive Monster Hunter Generations, which debuted at No.3 in the UK back in 2016.

Capcom was not the only publisher to set a new record for one of its franchises last week, as Bandai Namco’s Dragon Ball Fighterz debuted at No.2, gaining one spot compared to launch sales of its predecessor, 2015’s Dragon Ball Xenoverse.

Elsewhere, Call of Duty: WWII saw its sales increase six per cent and made it to No.3, while FIFA 18 settled for No.4 with a 17 per cent boost in sales. The Legend of Zelda: Breath of the Wild also had a slight increase in sales (three per cent) and landed at No.7.

Further down the charts, Sony’s PSVR title The Inpatient debuted at No.10, while Nintendo’s re-release of Pokémon Crystal on 3DS entered the charts directly at No.12.

Marie Dealessandri is MCV’s former senior staff writer. After testing the waters of the film industry in France and being a radio host and reporter in Canada, she settled for the games industry in London in 2015. She can be found (very) occasionally tweeting @mariedeal, usually on a loop about Baldur’s Gate, Hollow Knight and the Dead Cells soundtrack.
@mariedeal
Previous Can Nvidia do anything to help gamers with cryptocurrency GPU inflation?
Next Epic Games issuing refunds to all Paragon players as it shutters service